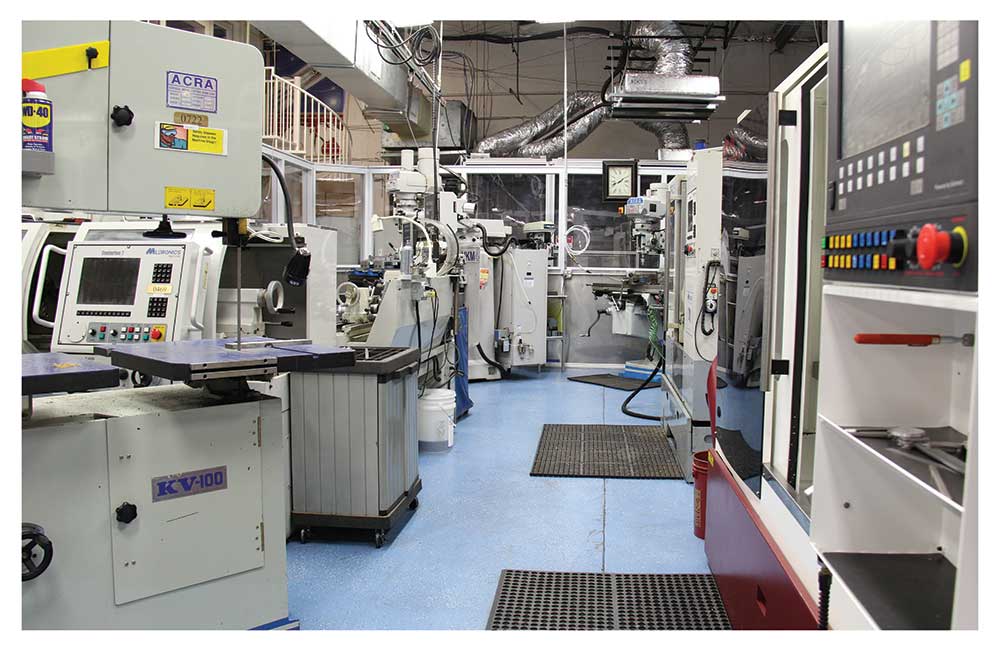 At Agora, our combined knowledge, experience, and versatility allows us to manufacture high quality parts, mechanical components, fixtures, and devices using CAD and CAM Related Software as design aids in conjunction with the equipment in our machine shop.

In Electrical Discharge Machining or EDM, electricity performs the material removal. EDM is capable of machining complex shapes and hard metals, as it removes metals at a slower rate. Molds and die makers, along with jet engine components rely on EDM. The process submerges an electrode and the workpiece in a dielectric fluid. Current flows between the workpiece and electrode to create patches of plasma zones heated at about 10,000 degrees C that produce instantaneous localized melting of the material. Although seemingly violent, EDM is precisely controlled.

EDM takes many forms to include Wire EDM machines which use a thin wire to cut with electricity. Ram EDM machines, also known as “die sinkers”, utilize electrodes that are custom machined into 3D shapes. EDM produces a cavity in the form of a “female” to match the “male” electrode from opposite it. With the small-hole EDM machine or “hole popper”, the electrode acts as a cylinder to machine a hole in the workpiece. Small-hole EDM machines are used to make starter holes for wire EDM along with finished holes in materials too difficult to drill.

“Turning” defines the work that is traditionally done on a lathe. Lathes have grown in sophistication through the years, and “turning centers” describe these sophisticated capabilities related to secondary spindles and/or rotating tools for milling and drilling. Turn-mill Machines are capable of milling and drilling parts as well as turning. In turning, unlike in milling or drilling, the workpiece spins while the cutting tool does not. The cutting tool feeds along the length or diameter of the rotating part. The workpiece in turning can be held in a chuck or collet (to name two of the more common workholding methods).

Turning machines may also contain spindles for cutting tools and non-turning operations. Milling and drilling to produce non-turned, non-rounded parts may be accomplished with the extensive capabilities of this machine. These machines commonly contain horizontal spindles. Vertical Turret Lathes or VTL refer to machines in which the workpiece rests on a table driven by a vertical spindle. Inverted Vertical Lathes hold the workpiece from above from a vertical spindle.

Grinding is also an effective process for machining workpiece materials that are too hard for milling or turning. Some grinders machine round parts. These machines include cylindrical grinders and centerless grinders. Surface grinders finish flat surfaces. Form grinders move the work and/or the wheel in various axes to grind precisely contoured surfaces. Other grinders are dedicated to machining the hard materials necessary to produce cutting tools for other types of machining operations. These are referred to as tool grinders or cutter grinders.

With this machine, parts requiring a variety of operations can be machined in one setup, particularly if the sub-spindles allow the parts to be passed from one spindle to another during machining. More recent turn/mill machines depart from the lathe design into something much more like a hybrid machine — combining a lathe’s chucks and spindles with the travels and milling power of a machining center.

A significant issue of this machine is determining which parts to run on each type. Many shops have discovered that, even though these machines developed from lathes, they are not necessarily limited to round parts. Various non-round parts can be machined on the same platform as efficiently, if not more efficiently, than on a machining center.

Inspection and Measuring Equipment includes all of the tools and devices that are used to verify that a part’s dimensions conform to the tolerances required by the part’s design. Included are various hand-held gages such as calipers and micrometers, along with simpler gage blocks or plug gages. However, inspection and measurement in most shops also goes beyond hand-held gages to include coordinate measuring machines or CMMs (the measurement machine tools able to execute programmed measurement routines). Also included in this category are devices such as profilometers that measure the finish of machined surfaces.

The CNC (computer numerical control) system of a machine tool includes the control unit itself and the less visible parts of the motion-control system, such as the servomotors, drives and axis positioning devices. These components are part of any CNC machine tool, but they may be bought separately and retrofitted later on older machines that are upgraded or refurbished.

Also part of the control system are sensors that allow you to control and make certain real-time decisions during unattended or lightly attended machining processes. These can include probes for measuring the position of the part or machined features, along with monitoring systems for detecting the presence of the tool, and/or observing the force that is being exerted in the cut.

CAM Software is used to generate machining programs that correspond to parts designs. Short for “computer-aided manufacturing,” CAM creates these programs for CNC machine tools including machining centers, lathes and EDM machines. Sometimes, machining programs can be written and input manually, right at the machine’s control. However, if the workpiece geometry is at all complex, or if the machined features are numerous, then generally CAM software is essential for generating the program both accurately and quickly.

The broad category of “cutting tools” includes all of the consumable tooling involved in milling, drilling, turning, and other lathe and machining center operations. Drills, end mills, taps, reamers, and inserts are all included here. Consumable tooling used on certain other types of machine tools are also included, along with toolholders and closely related accessories such as angle heads.

Workholding refers to devices used to a secure a work-piece and hold it in place against the forces of machining. The most basic work-holding device is a simple clamp screwed into place on a machining center table. Workholding can also involve complex fixtures that are custom-built for particular parts. Other common work-holding devices include vises and chucks along with indexers or rotary tables that change the part’s position while held in order to reach various features of the part without modifying the setup.

In most machining applications, workholding also locates the part. In turning, a chuck not only holds the part securely but also holds it precisely on the centerline of the spindle, while on a machining center, the vise or fixture that holds the part may also hold it in the precise position and orientation where the machining program expects to find it. For this reason, components such as locating pins and work-stops that make it easy to place piece after piece in the same location are also common workholding components.

Have a design challenge?

Let’s get in touch.